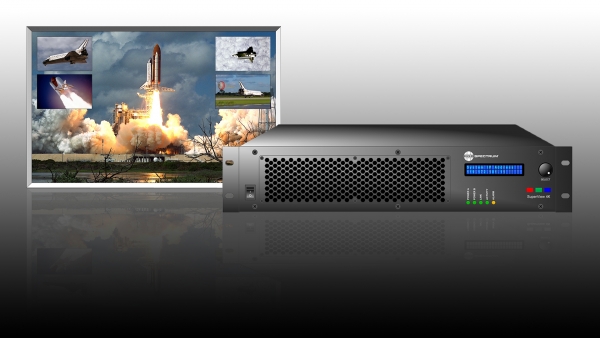 A new breed of 4K monitors and projectors are now entering the global market, and in fact, this technology is being called the next generation television standard. The term 4K refers to a panel or projector that has four times the resolution of high definition (HD) video. Some manufacturers are using the term "4K," while others, including the Consumer Electronics Association (CEA) are calling them Ultra HD (UHD) devices. Regardless of the name, the images are stunning and the quality is a major advance in photo realism.

Imagine four HD panels arranged in a quad - remove the bezels, stitch the pixels together behind the glass, and you'll get a good idea of just how impressive these panels are. HD video has a pixel resolution of 1920x1080, which rounds off to 2 million pixels (or 2 megapixels). Ultra HD has a resolution of 3840x2160, which rounds off to 8.3 megapixels. It's extraordinary, to say the least.

Figure 1 - Large scale Ultra HD panel. Many television manufacturers are producing 84" models, as well as smaller diagonal sizes from 30" to 60".

Most every consumer HD television uses a High Definition Multimedia Interface (HDMI) port to connect their panel to a cable box, satellite receiver, or Blu-ray player. HDMI version 1.3, released in 2006, is today's de facto consumer standard. This protocol supports HD resolutions (1920x1080) plus audio, and a variety of HDMI connectors and adapters are readily available for peripheral devices such as cameras.

Some current 4K panels have four DVI input ports or four HDMI 1.3 ports. These connections allow users to input four individual HD signals - one to each of the panel's four quads. Using the panel's internal scaling capability, any HD input can be zoomed up to the full 4K dimensions - but one is not looking at a true 4K source. In this "scaled" mode, pixels are being duplicated.

To display a true 4K source using HDMI 1.3 or DVI connectivity, one has to load the 4K source on a PC with a quad-head graphics card. As shown below in Figure 2, the graphics card splits the signal into four HD sections, which are then connected to the 4K panel and seamlessly stitched together.

As shown in Figure 3, an alternate method for routing 4K content is to connect a specialized video server to the 4K panel, provided that the server outputs 4K content via four HDMI 1.3 streams or four DVI streams.

As illustrated below in Figure 4, direct connections are also facilitated from native 4K devices such as professional video cameras.

As the 4K rollout continues, it is anticipated that most new 4K panels and projectors will be equipped with HDMI 1.4a ports. Moving forward, some manufacturers will migrate to Display Port, while others will retain HDMI 1.4a and phase out HDMI 1.3. Regardless of the connector issue, the scarcity of 4K content remains a key discussion point.

Today, there's a wealth of HD content available - from Blu-rays to live broadcasts to "on-demand" HD services. At the consumer level, however, hardly any native 4K content is available for Ultra HD displays, and a solution will certainly lag behind the distribution of 4K panels.

Sony has temporarily solved the problem by providing their new Ultra HD customers with a proprietary 4K server loaded with 4K films. Concurrently, other companies and trade associations are moving forward with 4K research. For example, the Blu-ray Disc Association (http://www.blu-raydisc.com/en/index.aspx) is studying how their technology can be modified for 4K bitrates. Satellite communications firms such as Northern Sky Research (http://www.nsr.com/research-reports/satellite-communications) are also studying how to stream 4K content, and "compression" companies such as Eyeio (http://eyeio.com) are finding new ways to squeeze more data into smaller pipelines.

Given today's technology and the lack of 4K content, what can a new Ultra HD customer do with their eight million pixels? Once again, RGB Spectrum is at the forefront with SuperView 4K - a remarkable multiviewer designed to display up to eight HD images on a single 4K panel, or a single 4K image plus up to four HD images.

With a SuperView 4K multiviewer connected to a 4K panel or projector, a customer doesn't actually require 4K content in order to realize the full potential of their new display.

Figure 5 below illustrates just one of the many ways in which SuperView 4K excels.

Figure 5 - Using RGB Spectrum's SuperView 4K, up to eight multi-format and HD sources can be mixed together on the Ultra HD screen. Customers can also mix a native 4K source alongside HD or computer sources, without restriction.

Additional key SuperView 4K applications are listed below, each of which is not dependent upon 4K content:

Essentially, the SuperView 4K processor is a fully-featured multiviewer. It can turn an Ultra HD panel into a creative mixed array of 4K, HD and computer sources - with multi-format inputs, scaling, positioning, and presets for storing image layouts on the screen. With SuperView 4K at your command, customers can certainly be patient - while the content catches up to today's display and processing technology.

The Next Step Forward

All is not entirely rosy in 4K land. In addition to content, the problem is also price. These 4K panels are just starting to arrive in stores, and prices run from the $6000.00 range up to the $25,000.00 range for the large 84" models. Remember that consumers rejected 3D home technology almost entirely, and one hopes that price does not become the gating item with 4K. On a positive note, HD television prices have dropped significantly over the last three years, as the LCD "glass" makers ramped up their production lines. As factory yields increased, the costs went down proportionally. Based on supply and demand, one would expect the cost for 4K "glass" to decline as well.

In a recent industry announcement, Gary Shapiro, president and CEO of the CEA, was very upbeat about this new technology direction. "Ultra HD is the next natural step forward in display technologies, offering consumers an incredibly immersive viewing experience with outstanding new levels of picture quality."

Without a doubt, we're on the leading edge of a new era of displays. At the high end, even without 4K content, RGB Spectrum's SuperView 4K is available now for key business, medical, industry and military applications that require the industry's finest ultra HD multiviewer.